Year of the Tiger

Right next to La Casa de Bacalao is the bar where we usually get our beers. Their specialty seems to be huge prawns.

Afterwards we went to catch the Chinese New Year celebrations in Plaza de España, which included awful hip-hop dancing and the token white man singing songs in Chinese. Still, it was probably the first time I’ve seen so many Chinese people at once in the center of Madrid. 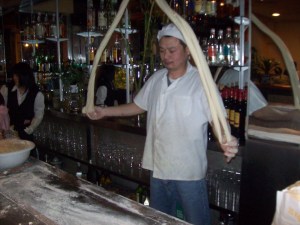 To continue the festivities we went to a Chinese restaurant in Bilbao that specialized in noodles. The guy at the bar puts on a show of making the noodles.

This is probably the most I’ve ever done for Chinese New Year, not including all those years when they made us sing and dance for the annual show in grade school. When you’re abroad, the things that make you different and that have defined you on the sidelines back at home suddenly leap into the foreground. You point at things and say, “That’s how my family does it…that’s what we eat, how we celebrate” and the Spanish marvel and gobble up the fresh egg tarts.

Lots of celebrations going on these days, getting myself ready for the Year of the Tiger! There´s going to be a parade and a food festival here in downtown Madrid this weekend, so it should be fun finding the familiar from home here in España.

Today all of our kids dressed up as animals for Carnaval… many insects, farm animals, sea animals, etc. to add to the collection of the savage species of homo sapiens they already are. We had a costume contest and went to see a marching band play (while the children ran around madly on all fours in the gymnasium). I think we have some more festivities coming up in the afternoon. Afterwards I am going to go home and shut myself in from the terrible cold and make some hot chocolate. Speaking of which, I must share the secret recipe…

I´ve been telling people that I feel as if I´m in hibernation mood. Eating and sleeping a lot, not feeling like going outside into the cold, getting tired easily and looking forward to getting into the warm cocoon of my bed… As we´ve always said during our New York winters: ¨It´ll never be warm again!!¨ Hopefully there´ll only be two or three more weeks of this weather and then Madrid will again be the playground of booze and sun like I´d always known it.

The Stuff of Dreams

That Time of Year

Other Places I Exist